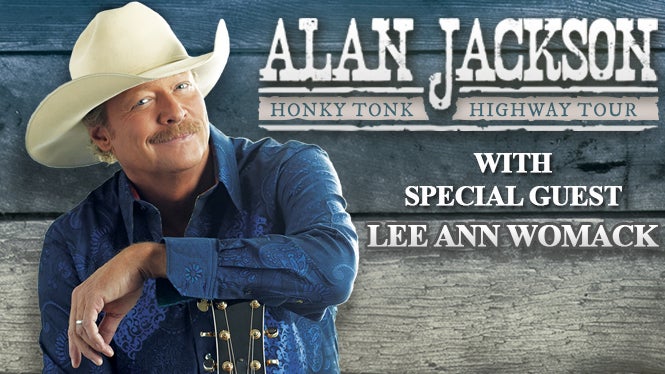 Join the celebration as 2017 Country Music Hall of Fame inductee Alan Jackson brings his 2017 Honky Tonk Highway Tour to Target Center on Saturday, October 28 with special guest Lee Ann Womack! Tickets and information are available at Target Center’s box office, online at TargetCenter.com, by phone at 888-929-7849, and by visiting www.alanjackson.com, where you can find information about Alan, his tour schedule, music and more. VIP tickets and packages are also available.

Jackson’s recently-announced induction to the Country Music Hall of Fame has turned his upcoming Honky Tonk Highway Tour show into a night of celebration with his fans – a chance for everyone who enjoys and has been touched by his music to join the party and share in his success! “For a man who loves country music there is no higher honor,” the entertainer says. “This is the mountain top!"

Special guest Lee Ann Womack joins Jackson for his Minnesota show. As a Jackson duet partner of long-standing, Lee Ann has appeared on several of Alan’s albums, and the two have shared a number of stages, including the Grand Ole Opry. Lee Ann also honored Jackson at the 2014 CMT Music Awards when he received his Impact Award. In Minneapolis, fans will hear hits spanning Lee Ann's career to date, as well as brand new and unreleased songs.

Jackson’s 2017 Honky Tonk Highway Tour comes on the heels of the recent 25th anniversary celebration tour which found the superstar playing to sold-out crowds throughout 2015 and 2016. Jackson recently released the album, Angels and Alcohol, and is the subject of a new box set, Genuine: The Alan Jackson Story.