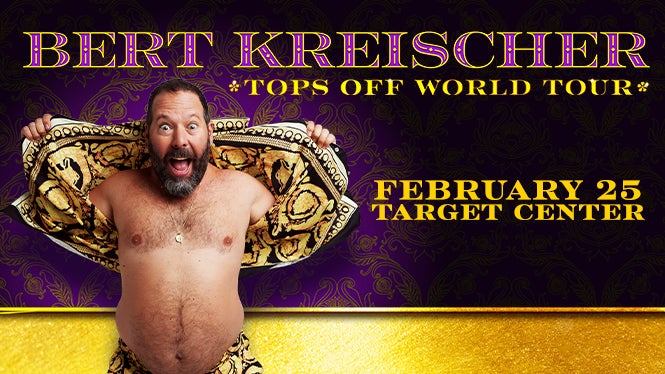 Award-winning comedian Bert Kreischer takes the Target Center stage on Saturday, February 25 as the Tops Off World Tour! makes a stop in Minneapolis. Tickets are on sale NOW!

“A rare and incredible talent” (Interrobang) whose “success isn’t a surprise” (Variety), Bert Kreischer has become an award-winning entertainment juggernaut and a master of virtually every medium he tackles: standup comedy, TV, podcasts, a memoir and album, and soon his first feature film. He was Pollstar’s #1 2020 standup touring artist in the midst of a global pandemic, selling out arenas and the legendary Red Rocks Amphitheatre, and earning Pollstar’s Damn The Torpedoes: 2020-2021 Touring Artist award. Followed soon after by Variety’s 2021 Creative Impact in Comedy award.

Bert has revolutionized live comedy performances with 2020’s Hot Summer Nights tour of drive-ins and this year’s Fully Loaded Comedy Festival that took Kreischer and his favorite comedians to such open-air venues as minor league baseball parks, a racetrack and amphitheater. He boasts two of the most-popular comedy podcasts in the world, “Bertcast” and ”2 Bears 1 Cave” (with Tom Segura), stars in his own Netflix show “The Cabin with Bert Kreischer,” and hosts the wildly-successful “The Go Big Show” on TBS alongside celebrity judges T-Pain, Rosario Dawson, Jennifer Nettles, and Cody Rhodes, now heading into its third season. Three of his four comedy specials are currently streaming on Netflix, “The Machine,” “Secret Time” and “Hey Big Boy.” And he stars in, wrote, and produced his upcoming movie, also “The Machine,” co-starring Mark Hamill of “Star Wars” fame.

“The Machine,” a unique story from his true-life experiences on a college study group in Russia when he was mistaken for a Russian mafia boss robbing the train he was on, represents a pivotal shift upward in Kreischer’s career. He wrote the story as a routine after returning home from a disappointing New Year’s Eve gig in Oxnard, CA where no one showed up.

At the time, he enjoyed a busy schedule touring comedy clubs, had chalked up TV credits for “Bert the Conqueror” and “Trip Flip” for the Travel Channel, “Hurt Bert” on FX, and other hosting and acting roles as well showcasing his routine on TV talk shows. “When I got into this business, everyone followed in lockstep so much: It was get your tight 10 [minutes], get on Conan, get on Letterman, get on ‘The Tonight Show,’ get a development deal, get a commercial…” Kreischer explains. “Even though I did that for a period of time, the second I started listening to my own gut was when I started really succeeding.”

After writing “The Machine” story, Bert shot himself delivering it, posted it on Facebook, and went to bed. Bert’s wife LeeAnn woke him the next morning to announce that the clip had gone viral, with 22,000 shares. By just a few days later, it had racked up a phenomenal 33 million views, Now, at more than 85 million views and counting, “The Machine” became the centerpiece of Kreischer’s next comedy special and what Deadline calls his “genre-busting” debut film.

“I love the idea of doing things a little differently and not being afraid to do things a little differently,” he asserts. To wit, when the Covid-19 pandemic first surged in 2020, Kreischer worried about how he and his fellow entertainers whose income relied on touring might survive. So he booked a four-date socially-distanced tour of drive-in theaters called Hot Summer Nights. “Every agent in the business told me not to do drive-ins,” he recalls. The tour sold out and created a new live entertainment option during the pandemic.

This year he introduced another imaginative touring mode, his eight-date Fully Loaded Comedy Festival, featuring his favorite fellow stand-up comics on various dates. Billed as a celebration of “comedy, cold beer, and sunsets.” It started selling out soon after it was announced, and went on to set the attendance record for comedy shows at the Bristol Dragway in Bristol, TN, Frontier Field in Rochester, NY, Coolray Field in Lawrenceville, GA, and Day Air Ballpark in Dayton, OH. It happened in the midst of his Berty Boy Relapse tour making up pandemic-postponed shows followed by a fall run of dates at prestigious North American venues and a return to Red Rocks, perfecting material for his next special to be shot in Omaha, NE on November 18, 2022.

The origin of Kreischer’s comedy career is as unique as his distinctive comedic brand of hilarious storytelling and observational humor, delivered shirtless.  The Tampa, FL native first burst into the public eye when Rolling Stone magazine published a major feature article on him in 1997 as the "Number One Partier in the Nation" during his sixth year of college at Florida State University, then rated as the national number one party school. It lit a bulb in Kreischer’s imagination that standup comedy might be the career choice he had yet to make for when he finally left college. And a way to continue his genuine love for partying into adulthood.

In the wake of the article, he first tried standup at, in this case, the aptly-named venue Potbelly’s in Tallahassee. “Afterwards, I called my Dad and said, this is what I’m going to do for the rest of my life. I got to be every part of me that I like being and everyone enjoyed it.” He was offered a morning DJ shift on a local radio station as a result of the show. Instead, he moved to New York City, and at age 26 wrangled his way into both working and honing his act onstage at the seminal Greenwich Village venue the Boston Comedy Club alongside such fellow budding talents as Sarah Silverman, Adam Sandler, Jim Gaffigan, Ed Helms, and other notables.

Early opportunities that came his way augured big things to come in the future, even if some didn’t work out as intended. Oliver Stone optioned the rights to the Rolling Stone article to develop it into a feature film starring Bert (a writer of a spec script for the project adapted it to become the movie “Van Wilder”). Soon after, Will Smith recruited Kreischer to star in a CBS TV sitcom pilot, “Life With David J,” with Elliott Gould.

Since migrating to Los Angeles, where he lives with his wife LeeAnn and their two daughters, Georgia and Ila – all of whom figure in his routines – Kreischer first made his bones on the standup club circuit and appearing on “The Late Show with David Letterman,” “Jimmy Kimmel Live,” “Conan” and “Racheal Ray” along with acting parts on shows like the acclaimed police drama “The Shield.” He wrote about his life to date in “Life of the Party: Stories of a Perpetual Man-Child,” published by St. Martin’s Press, and released the CD Bert Bert Bert in 2007.

His uniqueness has also helped drive Bert’s success he came out onstage one night and ripped off his shirt for a laugh. As the show went on he enjoyed being shirtless. “I am so Florida,” he notes. “I was barefoot and shirtless all the time as a kid, and still am most of the time onstage and off. It’s how I like to live.” It’s become part of his trademark as well as a signal of body positivity for the countless regular guys among his millions of fans that don’t boast cut and chiseled gym bods when they doff their shirts at the pool or beach.

A master humorous storyteller in a long and proud tradition that stretches back to legends like Mark Twain and Will Rogers, Bert is making his mark on modern culture with frank, no-holds-barred humor that tackles family and fatherhood, current events, his personal adventures, daily routines and legendary party-hearty ways, and much else that strikes his inspired fancy. And all the while, he continues to be innovative and imaginative as well as riotously hilarious.

“Everything about me is trying to be authentically in the moment and of the essence,” he concludes. It’s a realness and sincerity that creates considerable appeal to the masses from a near-countless variety of walks of life. “I just started doing stuff that I found fun. I found enough confidence in myself to go, ‘I got here doing what I wanted and what I loved. I’m just going to do what I love and not let people tell me what I should be doing.’”