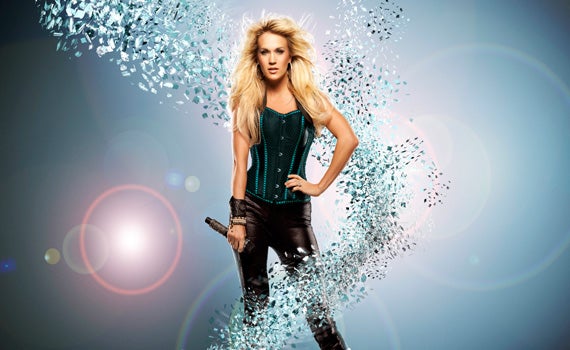 Carrie Underwood's “The Blown Away Tour" will stop in Minneapolis at Target Center on September 27! The North American tour dates will be presented and hydrated by vitaminwater®, sponsored by Olay, and promoted by AEG Live. Special guest Hunter Hayes will open.

“I can’t wait to get back out on the road and perform new music from my new album for my fans,” says Carrie. “We have a lot of exciting things planned!”

Carrie is donating $1 from each ticket sold on the North American leg of “The Blown Away Tour” to support Red Cross disaster relief. Every year, the American Red Cross prepares for and responds to nearly 70,000 disasters across the United States. This donation will help the Red Cross provide shelter, food, and emotional support for those in need after a disaster.

Carrie’s two previous headline tours, 2008’s “Carnival Ride Tour” and 2010’s “Play On Tour,” performed for a combined total of nearly 250 shows with 2.2 million fans in attendance, and she wrapped both years as the top-ranked female country touring artist.

Since releasing Some Hearts in 2005, Underwood has sold more than 14 million albums with Some Hearts, 2007’s Carnival Ride, and 2009’s Play On. She’s amassed 14 No. 1 singles, six of which she co-wrote, and became the first country artist in history and the only American Idol winner ever to achieve 10 No. 1 singles from their first two albums. Underwood currently leads the nominations for the upcoming CMT Music Awards with five. She is a five-time Grammy winner, a two-time Academy of Country Music Entertainer of the Year, a three-time Country Music Association and ACM Female Vocalist winner, and a proud member of the Grand Ole Opry.

Hunter Hayes, the multi-talented writer, musician, producer, and performer, is the only country artist to play every instrument, write/co-write every song, and co-produce his critically acclaimed self-titled debut album. As the 2012 ACM New Artist of the Year nominee, Hunter has been touring and performing live for decades, most recently selling out venues across the US and Canada on his MOST WANTED headline tour. This multi-instrumentalist continues to garner praise from fans and critics alike as he made his world-premiere national television debut on CBS’ Late Show with David Letterman and also performed with The Roots on Late Night with Jimmy Fallon and on Good Morning America. The Louisiana native has shared the stage with Taylor Swift, Rascal Flatts, Keith Urban, Lady Antebellum, Trace Adkins, Brad Paisley, and Hank Williams, Jr. to name a few. His current Top 40 hit "Wanted" is quickly climbing the radio charts and holds the unprecedented #1 slot for three weeks in a row on GAC's Top 20 Countdown. For more information on Hunter Hayes, please visit www.HunterHayes.com.