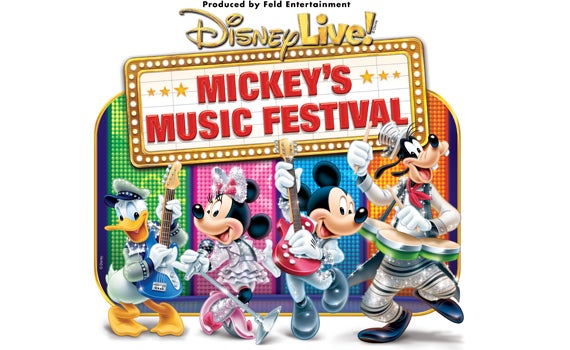 Mickey Mouse and his band of friends including Minnie Mouse, Donald Duck and Goofy, will be performing in a music mash-up of mega proportions when Disney Live! Mickey’s Music Festival debuts at Target Center in Minneapolis for two performances on October 12. Concert goers will hear greatest hits from the blockbuster movies, Aladdin, The Little Mermaid, and Disney/Pixar’s Toy Story remixed to rock, pop, reggae, hip-hop, jazz and country, among other jams.  Produced by Feld Entertainment, Disney Live! Mickey’s Music Festival strives to be the biggest concert experience to hit live family entertainment.

Disney Live! Mickey’s Music Festival, featuring an all star line-up of more than 25 Disney characters, begins with audiences watching a state-of-the-art video projection of the frenzy backstage which spills onto the stage as Mickey welcomes guests to his concert tour. Soon thereafter, they will be transported to a new world of hip hop beats, dizzying acrobatics, flying carpets and magical transformations with Aladdin, Jasmine and Genie. Underwater is where the crowd will meet up with Ariel, Sebastian and their nautical pals to groove to the reggae rhythm. And, family and friends will stomp to the beat as Woody, Buzz and Jessie teach them how to boogie rodeo-style.

“One song can touch millions of people around the world and Disney has been at the beat of this concept for years by making music a main ingredient of storytelling,” said Producer and CEO of Feld Entertainment Kenneth Feld.  “In Disney Live! Mickey’s Music Festival we are celebrating with the Disney characters to a soundtrack of the latest sounds and chart-topping hits. We want our guests to walk away with lasting memories and singing these unforgettable melodies long after they leave the show.”

Director/Choreographer Fred Tallaksen Award-winning choreographer of Madonna’s “Sorry” video and the finale of her Confessions World Tour; in 2008, earned a Latin Grammy® in the Best Video category for Juanes’s “Me Enamora;” has choreographed for many TV shows, including “Modern Family,” “Outsourced” and “Wizards of Waverly Place;” skating consultant for “Austin Powers III-Goldmember;” and directed and choreographed for Disney’s Phineas and Ferb:The Best LIVE Tour Ever!
Writer Jeremy Desmon’s credits include The Girl in the Frame, If You Give A Mouse A Cookie & Other Storybooks and Curious George Live!. He received the 2007 Kleban Award for excellence in Musical Theatre Bookwriting, and is also a recipient of the Dramatists Guild’s Jonathan Larson Fellowship

Lighting Designer Sam Doty Assisted in the building and planning of every Feld Entertainment show since 2006, including Disney On Ice presents Worlds of Fantasy, Disney Live! Mickey’s Music Festival and multiple editions of Ringling Bros. and Barnum & Bailey® circus
Music Director Stan Beard has arranged and written the musical score for numerous Disney On Ice productions, and has worked in the recording studio with such luminaries as Barbra Streisand and Frank Sinatra.

Be sure to register your child for Buddy Bands, presented by Kinderberry Hill!  Buddy Bands is a program designed to assist in the prompt and safe return of a child in case of a separation from their parent.  This FREE SERVICE is avalable at Guest Services at all Target Center events.  Click here for more information.