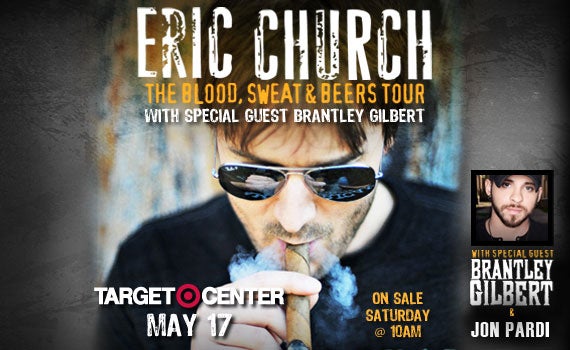 Eric Church brings "The Blood, Sweat and Beers" tour to Target Center on Thursday, May 17th!

With word-of-mouth long fueling Eric Church’s sweat-soaked sold-out crowds, Church surprised Music Row naysayers in 2011 when his third release, CHIEF, debuted at the top of the Billboard Top 200 and held the No. 1 spot on the Country Albums Chart for two weeks—a true testament to the years of hard work by Church and his band on the road. CHIEF has since been certified Gold and produced the Top 15 hit Homeboy as well as current No. 1 single Drink In My Hand with Church’s live show serving as the backdrop for the music video counterpart. The album also received a Grammy nomination for Best Country Album. No other up-and-coming artist is quite as suitable for the raucous Church crowd as Brantley Gilbert. Gilbert, who has experienced recent radio success with his No. 1 hit, Country Must Be Country Wide, has been building his fanbase on the outskirts of “polished” country for years in the southeast. Similar to Church, Gilbert brings grit and attitude to the stage – and he should fit in just fine with the theme of The Blood, Sweat & Beers Tour.