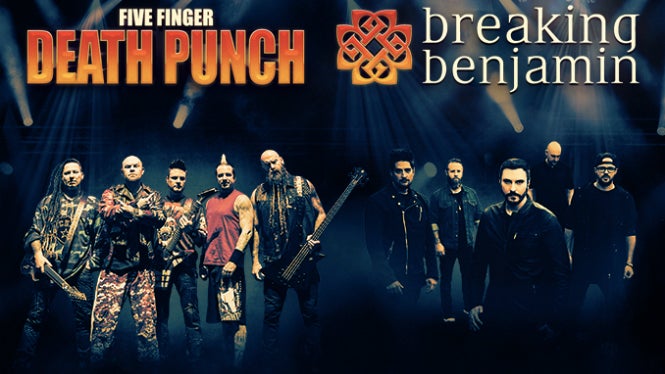 Due to high fan-demand, Five Finger Death Punch and Breaking Benjamin have announced an expansion of their co-headlining North American Outdoor Amphitheater tour with additional dates which will take both bands through fall 2018. The groups launched their massive summer tour with electrifying performances and stage production to ravenous packed crowds in Seattle on July 16. The tour is co-produced by Live Nation and Frank Productions. On the Fall leg of the tour, global 2018 breakout rock band Bad Wolves will once again join the trek on select dates. Chart toppers From Ashes To New will be support on all fall dates. The artists on the tour are also dominating the rock charts with their most current singles with Five Finger Death Punch at #7, Breaking Benjamin at #8, Bad Wolves at #16 and From Ashes To New at #3 this week. For tickets to the biggest rock event of the year, VIP offerings and more info, visit here and here.

"We have an extremely loyal travel-to-the-end-of-the-world diehard fanbase, so our shows are always packed and a blast. With that said, this current run turned out to be the most-attended, most-successful tour we have done to date,” explains Five Finger Death Punch guitarist Zoltan Bathory.  “Those cities we couldn’t fit into this summer run--worry not--we heard you all! We’re extending this tour all the way through the fall, so we will see you soon."

“We’ve been having a blast on this Summer tour with Five Finger Death Punch,” adds Breaking Benjamin lead vocalist Benjamin Burnley. “The reactions to this tour from both of our fanbases have been huge, so it only made sense to keep the fun going this Fall. We’re happy to have a chance to play more songs from EMBER while reminding the World that Rock’s Not Dead. See you there!”

"The summer tour has been incredible; the sales, performances, and fan reactions have gone above and beyond our wildest dreams!” explains Larry Frank, COO of Frank Productions. “We had to bring this tour back to arenas in the fall to make sure every fan gets to experience one of the best shows of their life.”

Fans purchasing a ticket to the tour are also supporting two charities that are close to the co-headliner’s hearts as they are donating a portion of every ticket sold to two charity organizations. Five Finger Death Punch has chosen C.O.P.S - Concerns Of Police Survivors, an organization whose mission is rebuilding shattered lives of survivors and co-workers affected by line of duty deaths, through partnerships with law enforcement and the community. On Saturday, July 21 in Boise, ID, the Boise Police Department presented Five Finger Death Punch with an award for their continued financial and emotional support.

Breaking Benjamin has chosen Prevent Child Abuse America to help counteract the abuse and neglect of our nation’s children by promoting services that improve child well-being and developing programs that help to prevent all types of abuse and neglect.

The summer and fall tours come on the heels of the co-headliners’ two new hard rock album releases which topped the charts this spring. The multi-platinum Five Finger Death Punch—who released their seventh studio album, And Justice For None (May 18) debuting at #4 on the Billboard Top 200 chart --and multi-platinum artists, Breaking Benjamin—whose sixth studio album Ember (released April 2018) debuted at #3.

Five Finger Death Punch’s AND JUSTICE FOR NONE (released via Prospect Park), has sold over 100,000 albums and generated 100 million U.S. on-demand streams and over 250,000 US digital song sales. Fueled new single and video for “Sham Pain,” currently #7 at Active Rock and the Top 5 rock song “Gone Away,” AND JUSTICE FOR NONE marked the group’s fifth consecutive Top 5 album release. The album also had four #1 placements on other charts including: Top Digital Albums, Top Rock Albums, Top Hard Music Albums and AND JUSTICE FOR NONE is the #1 streaming Hard Rock/Heavy Metal Album of 2018. Produced by the band and Kevin Churko (Ozzy Osbourne, Disturbed) with And Justice For None, Five Finger Death Punch has once again stepped up their game maintaining their signature intensity, all while pushing themselves into new territories. Purchase And Justice For None or stream the album here: https://fivefingerdeathpunch.com.

Breaking Benjamin’s self-produced sixth studio album, EMBER debuted at #3 on the Billboard Top 200 in late April, selling over 300,000 albums to date. EMBER is the multiplatinum band’s fourth Top 5 debut on the Billboard Top 200, following 2015’s #1 debut for Dark Before Dawn, 2009’s Dear Agony which debuted #4 and 2006’s Phobia which debuted #2. EMBER has already spun off a #1 hit at Active Rock Radio with “Red Cold River”, granting the band their 8th #1 single. The album’s latest single, “Torn In Two” has already amassed over 11MM streams and is steadily climbing the Active Rock charts from a current #8 position. EMBER adds to a healthy 7MM+ album units sold for Breaking Benjamin and charted in the Top 10 across numerous countries Worldwide, as well as broke records by topping #1 charts across various genres, such as: Top Alternative Albums, Top Rock Albums, Top Hard Rock Albums and Top Digital Albums. Purchase Ember or stream the new album here.

Bad Wolves released their debut Disobey, (May 2018) via Eleven Seven Music, achieved the #22 spot on the Billboard Top 200, #2 on the Hard Rock Chart, #4 on Rock, and #8 on the Top Current Albums Chart’. The global breakout single “Zombie” has been certified Gold in the United States and Australia as well as Platinum in Canada. The track has topped charts worldwide, including the U.S. iTunes overall and rock charts, Billboard’s Mainstream Rock Songs chart, Spotify’s Global Viral 50 chart, while also reigning atop the Active Rock radio chart for three straight week. The official music video, a tribute to the late singer Dolores O’Riordan of the Cranberries and an homage to the original, has  garnered over 125 million views across platforms.  On June 19, 2018, Bad Wolves presented a $250,000 check to Dolores O’Riordan’s four children, and with a promise to donate all of their proceeds. Bad Wolves’ current single “Hear Me Now” feat. Diamante is quickly climbing up the charts currently at #22.

Lancaster, Pennsylvania based band, From Ashes To New consisting of front man/rapper/programmer Matt Brandyberry, guitarist Lance Dowdle, vocalist Danny Case, and drummer Mat Madiro, embark on their sophomore release, The Future released 4/20. Their last album Day One saw the band break into the Top 10 Active Rock Chart with the track “Through It All” and continued to build momentum with the streaming hits “Breaking Now” and “Lost and Alone.” The fans gave the band a warm welcome when the first single “Crazy” was premiered by SiriusXM Octane. The Future is a massive step forward for the band that establishes them as one of the leaders of their genre. Now it’s time to make that future a reality.