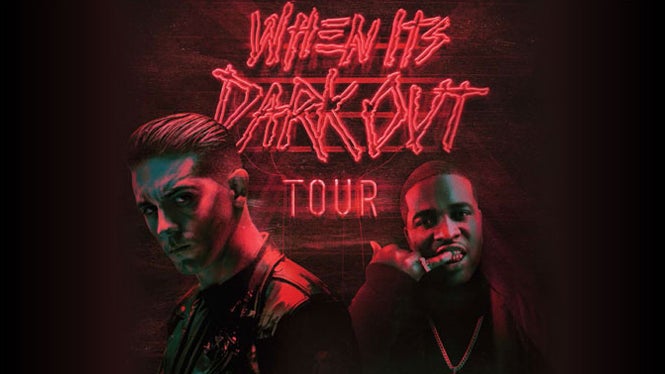 WHEN IT'S DARK OUT TOUR

Acclaimed rapper G-EAZY has announced the dates for his 2016 “When It’s Dark Out” world tour. The tour in support of G-Eazy’s highly anticipated sophomore album When It’s Dark Out (due out December 4th) will kick off on January 6, 2016 in Portland, Oregon.  The North American leg of the tour which will make stops at New York City’s Terminal 5 and Los Angeles’ Shrine Expo Center will culminate at the Bill Graham Civic Center Auditorium in San Francisco on February 11, 2016 and mark G-Eazy’s biggest hometown show to-date.

A limited number of “early bird” tickets at a special, discounted price as well as special VIP packages will go on sale beginning today, November 10, 2015 at 2 PM local time at WhenItsDarkOut.net for the North American leg only. Tickets go on-sale to the general public as well as Australia and Europe beginning on Friday, November 13th, 2015at 10 AM local time. Please visit WhenItsDarkOut.net for more information on ticket sales.

All US dates will include support from opening acts A$AP Ferg, Marc E. Bassy and Nef the Pharaoh. A$AP Ferg is a critically lauded hip-hop artist who is gearing up to release his much-awaited sophomore album due out early next year. Keeping true to form for being known for bringing his home town comrades on the road, G-Eazy enlists buzzing Bay-area singer Marc E. Bassy who will re-release his latest EP The East Hollywood EP on December 4th  as well as  20-year-old rapper Nef the Pharoah who just released his self-titled debut album featuring his breakout hit “Big Tymin.”

Quickly becoming known for being one of his generation’s most exciting live performers, G-Eazy’s incredible skills as an entertainer have not gone unnoticed. Having been named by USA Today one of the best and biggest hip-hop touring acts on the college circuit, G-Eazy has toured relentlessly for years. His most recent tour, “From The Bay To The Universe”   which sold over 100,000 tickets and 60 SOLD-OUT shows, took G-Eazy across the globe, including North America, Europe, Australia and New Zealand. This summer, G-Eazy played a slew of the biggest music festivals across North America and Europe, including Outside Lands, Roskilde, Wireless Festival, closing sets at Lollapalooza and Bonaroo, and most recently Austin City Limits.

When It’s Dark Out comes fresh off the heels of G-Eazy’s “Me, Myself & I” with Bebe Rexha, the first single from the album. CLICK HERE to watch the video. G-Eazy also recently shared the track “Random” from the album, which can be heard HERE. The album is his most accomplished work to-date, showcasing his cinematic, personal storytelling. The album’s immersive, hard-hitting and sweeping productions include work from G-Eazy himself as well as long-time collaborator Christoph Andersson, Boi-1da, Southside, DJ Spinz, Kane Beatz, and Remo, amongst others. When It’s Dark Out is now available for pre-order at all digital retailers. CLICK HERE to pre-order the album on iTunes, CLICK HERE for Google Play and HERE for Amazon.

G-Eazy’s Billboard chart topping debut album, These Things Happen, was released in June 2014 to much attention. The album peaked at #3 on both the Billboard 200 and Top Digital Album Charts, and bowed at #1 on the R&B/Hip-Hop Chart and Top Rap Albums Chart.  Between the album and singles, G-Eazy’s past work has also amassed well over 50 million streams on Spotify. With the album still charting a year and a half later with over 250,000 albums sold, G-Eazy’s accomplishments have not gone unnoticed earning praise from the likes of The New York Times, Rolling Stone, Pitchfork, Billboard and more.