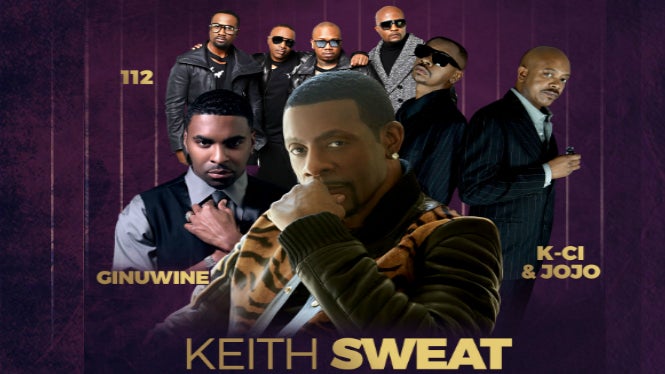 Keith Sweat, a Harlem-born R&B singer/songwriter known for his distinctive "whining" vocal style, released his debut full-length for Elektra, Make It Last Forever, in November 1987. The album sold over three-million copies, spawning the hits "I Want Her," "Something Just Ain't Right," "Make It Last Forever," and "Don't Stop Your Love." It was followed in 1990 by I'll Give All My Love to You, another million-seller, which featured the hits "Make You Sweat," "Merry Go Round," "I'll Give All My Love to You," and "Your Love, Pt. 2." Sweat's third album was Keep It Comin', an R&B chart-topper at the end of 1991 whose title track was another number one R&B hit.

K-Ci & JoJo (brothers Cedric "K-Ci" Hailey and Joel "JoJo" Hailey) have seen much success as one half of R&B group Jodeci, and as a duo. As K-Ci & JoJo, they have released five studio albums to date, plus a successful Greatest Hit album and numerous singles for theatrical films. Their debut album, Love Always garnered the smash #1 hit ballad "All My Life," plus two additional hits, "Last Night's Letter" and "You Bring Me Up." Their Platinum sophomore follow-up It's Real went top 10 on the Billboard 200 Chart and #2 on the R&B/Hip Hop Album Chart. The group has won a Blockbuster Award for Best R&B Group and an American Music Award for Favorite R&B Band/Duo. They have also been nominated for 3 Grammy Awards, 2 MTV Video Music Awards, a Soul Train Award, a NAACP Award and an additional American Music Award.

Equally rooted in gospel, soul, and hip-hop, 112 were the first and most successful urban vocal group to emerge from Sean "Puffy" Combs' Bad Boy Records roster. The four members of 112 -- Marvin, Daron, Q, and Mike -- met each other in high school in Atlanta, GA. "Only You," the group's debut single released in the summer of 1996, climbed to #3 on the R&B charts, peaking at #13 on the pop charts. 112 was released in late 1996, with Combs as the executive producer, and it steadily worked its way to gold status as the group's second single, "Come Seem Me," reached #15 on the R&B charts. Room 112 followed in 1998, and Part III, with Grammy-nominated “Peaches and Cream” and “Dance With Me,” was issued three years later.

Ginuwine was discovered in 1996 by Jodeci. In New York, he met up with young producer Timbaland and cut the track "Pony," whose slow, halting groove and impassioned vocals helped Ginuwine land a deal with Sony's 550 Music imprint. With the strikingly inventive Timbaland behind the boards, Ginuwine cut his debut album, Ginuwine...The Bachelor. "Pony" became a number one R&B smash, also reaching number six on the pop charts, and the album became an eventual double-platinum hit. It spun off several more R&B hits over the next year, including "Tell Me Do U Wanna," "I'll Do Anything/I'm Sorry," "Holler," and "Only When Ur Lonely"; it also featured an homage to one of Ginuwine's main influences in the cover of Prince's "When Doves Cry."