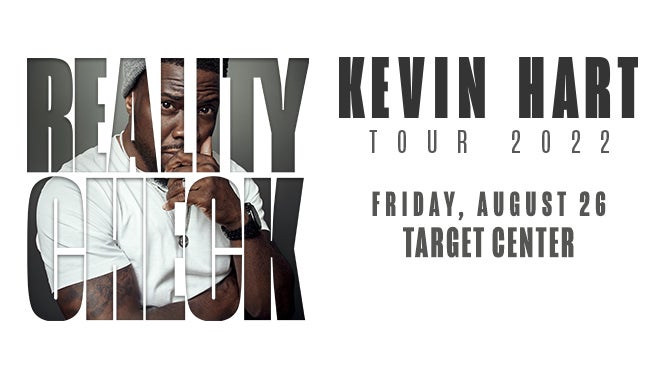 Kevin Hart: Reality Check comes to Target Center on Friday, August 26, 2022! Tickets go on sale this Friday, February 18 at 10am.

Emmy & Grammy nominated Kevin Hart was born and raised in Philadelphia, Pennsylvania where he launched his career as a comedian during an amateur night at a local comedy club. Over the years Hart has become Hollywood’s box office powerhouse, opening ten films at number one at the box office with $4.23 billion revenue at the global box office. Hart’s last global live standup comedy tour was “The Irresponsible Tour,” which was also released as an original Netflix standup special in April 2019. Additionally, his 2017 standup tour, “What Now,” grossed over $100 million worldwide and culminated in a performance to a sold-out crowd at Philadelphia’s NFL stadium.

This event will be a phone-free experience. Use of phones will not be permitted in the performance space.

Upon arrival at the venue, phones will be secured in individual Yondr pouches that will be opened at the end of the event. Guests maintain possession of their devices at all times, and can access them throughout the event only in designated Phone Use Areas within the venue. All devices will be re-secured in Yondr pouches before returning to the performance space.

All pouches and equipment are routinely sanitized. The Yondr staff is trained and required to follow safety guidelines and hygiene protocols to practice social distancing, minimal contact and wear required personal protective equipment.

Anyone seen using a device during the performance will be escorted out of the venue by security. We appreciate your cooperation in creating a phone-free experience."