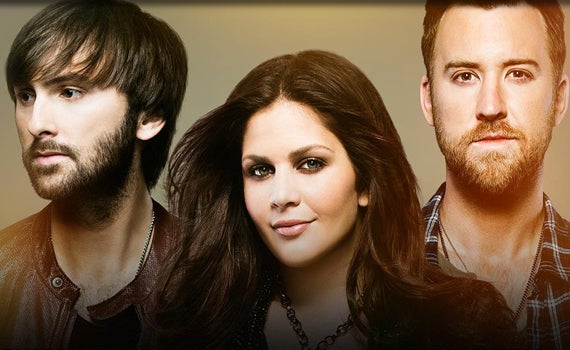 Seven-time GRAMMY award-winning trio Lady Antebellum will return to Target Center as part of the first leg of their headlining TAKE ME DOWNTOWN TOUR 2013. The group has invited Kip Moore and Kacey Musgraves to join the arena tour.

Last year, Lady A hosted over one million fans across the globe in 11 countries on their first headlining world tour, which earned them Billboard Touring’s “Breakthrough Award,” CMA’s “International Artists Achievement Award” and will accept the “Jim Reeves International Award” at this fall’s ACM Honors. The shows were inspirational and critics praised the band’s “youthful exuberance and unending energy.”
The harmony-based trio Lady Antebellum continues to reaffirm their beginnings by focusing on deft songwriting and fresh uses of their talents, which was at the heart of what drew them together in the first place. Since its 2006 inception, Lady A has won the “Vocal Group of the Year” honor from both the CMA and from the ACM’s three times in a row and sold over 11 million albums worldwide. The trio has taken seven trips to No. one on the country radio charts, earned five Platinum singles including their recent “Downtown” and has been awarded with seven GRAMMY awards including the all-genre “Record of the Year” and “Song of the Year.” In the end, the mix of their road experiences, songwriting and creative partnership have allowed the magic to remain - because they have kept the focus on the music.
Platinum-selling artist Kip Moore’s current Top Five hit “Hey Pretty Girl” follows two consecutive No. one songs off his debut album UP ALL NIGHT, which was the best selling debut album from any country artist released last year. His first No. one single, “Somethin’ ‘Bout A Truck,” held the top spot on both charts for two weeks making him the first solo artist in four years to have a debut album’s first single go No. one for multiple weeks. Moore has already sold out dozens of headlining shows this year, often in just minutes and recently played his first stadium show as part of CMA Music Festival: Country’s Night to Rock.

Nashville-based singer/songwriter, Kacey Musgraves released her debut album Same Trailer Different Park this past spring to massive critical acclaim and recognition. The album debuted at No. one on Billboard's Top Country Albums chart making her the first solo female in five years to open at No. one with a rookie release. She’s received ACM, CMT and Teen Choice Award nominations and her Top 10 single "Merry Go 'Round" was recently certified Gold and follow up single "Blowin' Smoke" is currently climbing the charts.