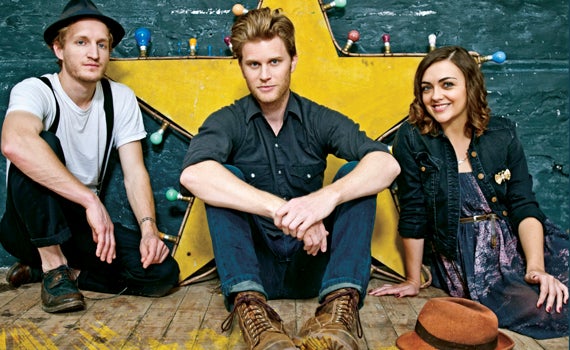 with special guests: Cold War Kids and J. Roddy Walston and the Business

The Lumineers are one of the latest in a long line of Colorado-based Americana bands to shake up the national folk/roots/Americana circuit.

A YouTube clip they posted of them performing "Ho Hey" (purchase/download) caught the eye of a Seattle-based management firm which flew them out to record a full-length album at the famed Bear Creek Studio just outside of Seattle. The resulting recording presented a creative blend of indie rock energy and traditional rootsy music.

Where many of the acoustic breakout bands of the past few years seemed to ride on the strength of either their pop appeal or their instrumental proficiency, the Lumineers were artfully straddling a new line, setting a new bar for breakout folk/Americana bands.

Word spread quickly from there, with local and independent radio stations around the country picking up the song "Ho Hey" for rotation. The track eventually piqued the interest of Dualtone Records, who inked a deal with the young trio and re-released their debut album, titled simply The Lumineers for national audiences in 2012.

In December 2012, the National Academy of Recording Arts and Sciences (NARAS) announced that the Lumineers were nominated for two Grammy Awards: Best Americana Album and Best New Artist. "Ho Hey" eventually made it to Number 5 on the Billboard chart, earning a platinum certification in both the US and Canada.