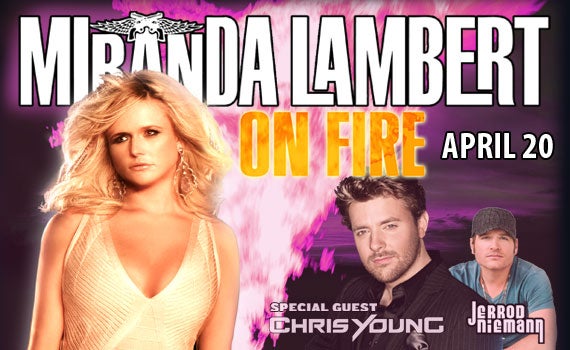 Two time CMA Female Vocalist of the Year, Miranda Lambert, will be On Fire when she hits the stage on Friday, April 20th with Chris Young and Jerrod Niemann at Target Center.

Miranda’s highly anticipated new CD ‘Four the Record’ is in stores now. “I'm looking forward to the tour and playing some new music from ‘Four The Record’ and kicking some attitude,” said Miranda. “Chris and Jerrod have great shows and we're gonna have a lot of fun out there this year and it will be a great year with our fans. See you out there!” Lambert, the reigning CMA Female Vocalist of the Year is nominated for two CMA Awards this year including Female Vocalist.

Chris Young brings a string of four number one singles to the tour including “Tomorrow,” the first single from his # 1 album, Neon. “I’m really fired up about touring with Miranda,” Chris said. “I’ve admired her talent over the years and I’m looking forward to spending the first part of 2012 on the road with her and Jerrod.” Chris was recently nominated by the CMA as “New Artist of the Year” and has 3 American Country Award nominations including “Breakthrough Artist of the Year.”

Jerrod Niemann launched his debut major label album Judge Jerrod & The Hung Jury, with the # 1 smash song, “Lover, Lover.” On the tour Jerrod said, “Miranda is as real as it gets. I'm proud to be a fan and thankful to be a friend. I look forward to joining her tour next year & catching up with my good buddy Chris Young.” Jerrod has 5 nominations for the upcoming American Country Awards.