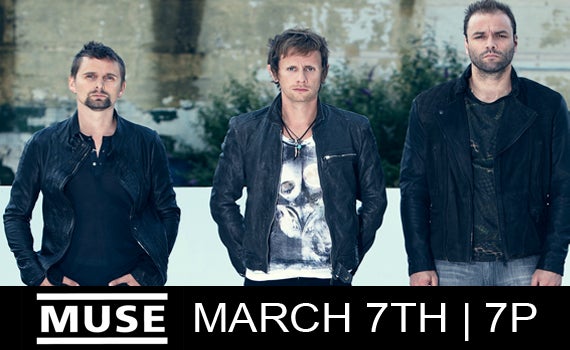 UK-based trio, Muse is touring in support of their sixth album The 2nd Law, which was recently released on Warner Bros. Records. Rolling Stone declared The 2nd Law as Muse’s “biggest, craziest music yet.” The band will make a stop at Target Center on Thursday, March 7.

Muse is Matt Bellamy, Dominic Howard and Chris Wolstenholme. Since forming in 1994, they have released five studio albums selling upwards of 15 million albums worldwide. The group's last album The Resistance reached Number 1 in 19 countries around the world, and they have won numerous awards around the world including a Best Rock Album Grammy Award and an American Music Award for The Resistance. In July 2012 Muse's song "Survival" was adopted as the official song of the 2012 Olympic Games. On October 2nd, the band released their 6th studio album The 2nd Law and performed their hit single "Madness" and "Panic Station" on Saturday Night Live on October 6th.

Floor seats for the March 7 show will be General Admission, with all other seats reserved.
PLEASE NOTE: The entire floor and sections 109-113, 129-133 are Paperless Ticket Delivery ONLY.

Tickets go on sale Saturday, October 13 at 10am Central Time.