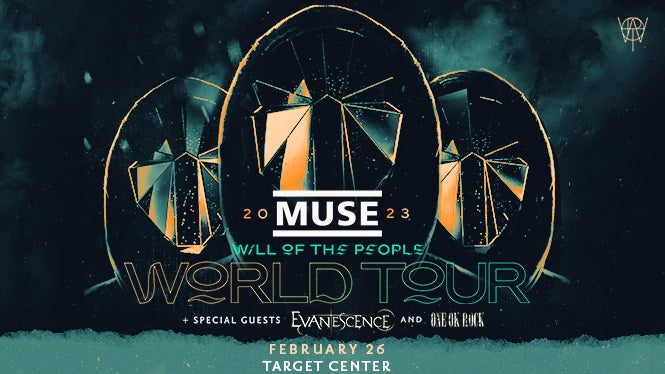 with special guest Evanescence and ONE OK ROCK

Following the release of their newest album, Will of the People, Muse makes its return to Minneapolis for the Will of the People Tour on Sunday, February 26 at Target Center. This performance will feature special guest Evanescence and ONE OK ROCK.

Tickets are on sale NOW!

Armed with guitars, synths, and one killer falsetto, British rockers Muse have been playing and performing like it's the end of the world since the mid-1990s. The trio of lead vocalist and guitarist Matt Bellamy, bassist Chris Wolstenholme, and drummer Dominic Howard first came together in Devon, England, as goth band Rocket Baby Dolls. At the time, their riveting showmanship on stage was already starting to show: In 1994, they won a local "battle of the bands" contest, switched their name to the trimmer and tidier Muse, and have since skyrocketed into one of the most electrifying stadium acts in the world.

Over their first few years, they played gigs around England and eventually recorded their first set of material, a self-titled EP, in 1998. But it wasn't until follow-up EP ‘Muscle Museum' that they first reached the NME Indie Singles Chart, and started accumulating comparisons to Radiohead. Their 1999 debut album ‘Showbiz' would follow, and its sci-fi-inspired alt-rock landed them on numerous European charts. Muse's bombastic eclecticism would only grow from here. Their next round of albums incorporated more touches of classical music, church organs, Mellotrons, and various experimental effects, and by their third album, ‘Absolution,' they'd kicked off a consistent streak of topping the U.K. charts.

Since 2006's ‘Black Holes and Revelations,' they began to conquer the U.S. as well, and their live shows became more and more extravagant as their music became more and more dystopic. The high-tech worldwide tours backing 2009's ‘1984'-inspired ‘The Resistance' and 2012's ‘The Second Law' would prove them to be a must-see event, with massive light displays and film projections, pyrotechnics, and even an LED suit for Bellamy. Their next album, ‘Drones,' scored them a Grammy Award for Best Rock Album in 2015, and gave them a good reason to incorporate real drones into their Drones Tour. Muse would continue on the surreal sci-fi path with 2018's synth-pop release ‘Simulation Theory' and a 2019 tour — quite possibly their most mind-blowing yet.