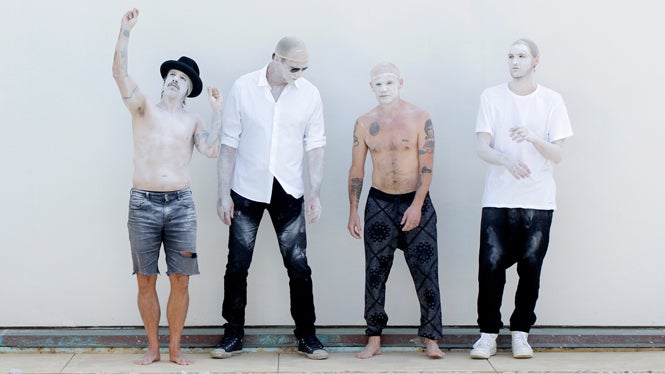 Red Hot Chili Peppers announce the first three legs of their 2017 North American Tour today. The band is touring in support of its 11th studio album, the worldwide No. 1 The Getaway.

The Getaway Tour kicks off January 5th, 2017, in San Antonio, TX, and will crisscross its way across North America and include a stop in Minneapolis at Target Center on Saturday, January 21, 2017. Trombone Shorty & Orleans Avenue and Jack Irons will provide support.  Reserved seat tickets ($101/$51) go on sale this Friday, September 23 at Noon and will be available at Target Center’s Box Office, online at TargetCenter.com, AXS.com, or call 888.9.AXS.TIX. Four ticket limit – strictly enforced. Every ticket purchased includes a choice of a standard physical or standard digital copy of The Getaway.

The Getaway debuted at #1 on the Billboard Album Sales Chart and at #2 on the Billboard Top 200 upon its release in June. The Getaway marks the Grammy Award-winning band's seventh top 10 album and third #2 on the Top 200 Chart. The album debuted at #1 in Australia, Belgium, Ireland, Netherlands, and New Zealand and at #2 in the United Kingdom and Germany. The Getaway was produced by Danger Mouse and mixed by Nigel Godrich.

The album was praised by Rolling Stone: “top-shelf modern-rock splendor”, People: “their best album in ages”, USA Today: “…proves not only that the longtime rockers still sizzle 30 years in, but also are capable of victoriously revamping their sound”, and many more.

Watch the video for the band’s “Dark Necessities” HERE and “Go Robot” HERE.

One of the most successful acts in rock history, Red Hot Chili Peppers, which is singer Anthony Kiedis, bassist Flea, drummer Chad Smith, and guitarist Josh Klinghoffer, have sold more than 60 million albums, including five multi-platinum LPs, and won six Grammy Awards, including "Best Rock Album" for Stadium Arcadium, "Best Rock Performance By a Duo or Group" for "Dani California," "Best Rock Song" for "Scar Tissue," and "Best Hard Rock Performance With Vocal" for "Give It Away."  The band was inducted into the Rock and Roll Hall of Fame in April 2012. The Red Hot Chili Peppers' last studio album, The Getaway, was released by Warner Bros. Records on June 17, 2011.