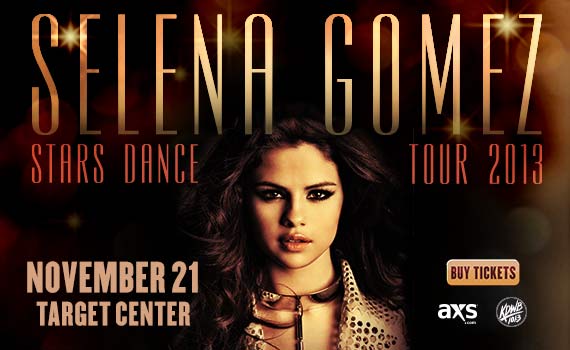 World-wide, multi-platinum-selling singer and actress Selena Gomez will embark on a 56-city world tour in support of her highly anticipated summer album. The tour will stop at Target Center on November 21!

“I couldn’t be more excited to tour again but this time around the world,” said Selena. “This has been such an interesting few months. My music has grown and I want my fans to see a new side of me. Can’t wait to see y’all on the road!”

Selena fans have been in a frenzy since she premiered the single “Come & Get It” from her forthcoming album and made her debut television performance of the song last night live on the 2013 MTV Movie Awards. The single is available now everywhere. Selena’s upcoming TV blitz will also include an April 16 appearance as a guest and performer on Ellen and a performance on Dancing With The Stars that night, as well as an April 24 appearance on The Late Show with David Letterman. She is also creating buzz this month as she adorns the April cover of Harper’s Bazaar.

As an artist, Selena has already sold more than 10 million singles in the U.S., along with three RIAA-certified top-ten debuting gold albums, and three #1 Billboard Dance Singles.

Her last album, When The Sun Goes Down with Selena Gomez & The Scene was released June 28, 2011 and was certified gold in November of that year.

X Factor breakout band Emblem3 will join the tour as the opening act.  “We’re so psyched to be touring North America and Canada later this year, hitting a bunch of cities our fans haven’t seen us in yet,” said Emblem3. “We’ve been looking to get back out and couldn’t think of anyone more dope than Selena to do it with. Gonna be a fun ride!”