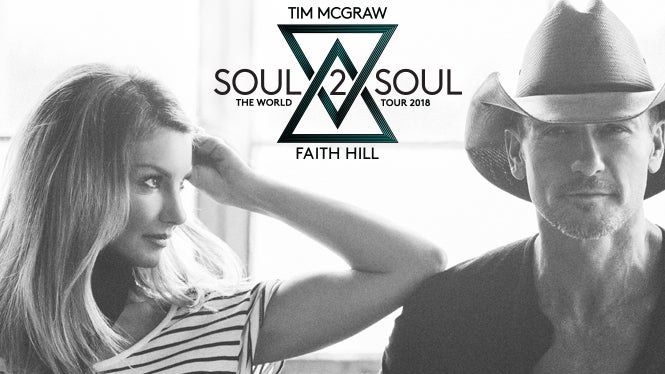 Tickets for the general public on sale Friday, Nov 17, the same day McGraw & Hill's first-ever album together The Rest of Our Life is released on Sony Music Entertainment under the Arista Nashville/McGraw Music imprint. Each ticket purchase will come with a copy of the new album.

Additionally, later that night the tour film Tim & Faith: Soul2Soul will premiere at 9 p.m. ET on SHOWTIME, on-air, on-demand and online. It includes live performances from their Soul2Soul tour, as well as unprecedented access to Tim and Faith with never-before-seen interviews and behind the scenes footage capturing their unmatched chemistry on and off the stage.

McGraw and Hill are also slated to receive the Legends of Live award at the 14th annual Billboard Touring Conference & Awards in Los Angeles on November 14.

The Soul2Soul World Tour - which is approaching 1 million in attendance on its initial trek - has consistently stunned audiences across North America with its sharp production, deep catalog of hits, and McGraw & Hill's palpable chemistry:

"The show's TIGHTLY EXECUTED PRODUCTION was UPSTAGED ONLY BY THE COUPLE THEMSELVES, who are UNDENIABLY AT THEIR BEST when collaborating." - Rolling Stone

"[The tour is] ENERGETIC and SEXY... it's clear that the pair is IN LOVE and GENUINELY ENJOYS performing together every night." - Billboard

"Hill DOMINATED the stage with her BOMBASTIC vocals... Each brought something different to stage - McGraw's ROCK-LACED NUMBERS provided the room with some ELECTRICITY while Hill's stage COMMAND and PLAYFUL CROWD INTERACTIONS made the show feel PERSONAL." - Des Moines Register

"Hill is a STUNNING LIVE PERFORMER and her talent is simply UNDENIABLE." - Winnipeg Free Press

"Hill... has such STUNNING RANGE, POWER and CONTROL that you have to conclude every other female country singer is COMPETING FOR SECOND PLACE." - The Patriot Ledger

"When Faith Hill and Tim McGraw get on a stage together, PURE CHEMISTRY becomes their genre... and the ELECTRICITY they generated could have POWERED their MEGAWATT STAGE PRODUCTION." - Tulsa World

Full details and tour dates can be found at http://soul2soultour.com. #Soul2Soul