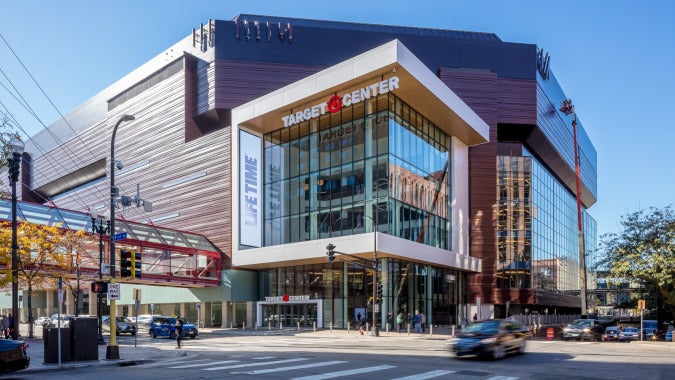 MINNEAPOLIS, MN & LOS ANGELES, CA (March 29, 2018) Hugh Lombardi has been appointed General Manager of the AEG Facilities-operated Target Center in Minneapolis, Minnesota, it was announced today by Chuck Steedman, Chief Operating Officer, AEG Facilities, the leading sports, live entertainment and venue operator in the world. In addition to serving as General Manager of Target Center, which just completed an 18-month, $145 million renovation, Lombardi will have cross functional responsibilities serving as a Regional Vice President of AEG Facilities where he will oversee other venues in the AEG Facilities network, as well as assisting with other initiatives undertaken by the company.

It was also announced that Target Center’s David Schmid was promoted to Assistant General Manager, Target Center and Tom Reller has been elevated to Regional Director of Operations for AEG Facilities.

“We are thrilled to have Hugh join the AEG Facilities and Target Center team in Minneapolis,” said Steedman. “Hugh brings a great depth of knowledge and industry experience and will play a key role in the continued success and stellar reputation of one of the country’s premier destinations for sports and entertainment. His documented success in all areas of venue management will be a real asset for the Target Center and AEG Facilities.”

In Lombardi’s new role, he will be responsible for the management of all of the newly renovated arena’s business operations, the creation of new events and the development of new revenue opportunities for the multipurpose 20,000-seat sports and entertainment arena which serves as the home to the NBA’s Minnesota Timberwolves and WNBA’s Minnesota Lynx. Lombardi will activate numerous AEG Facilities’ proprietary initiatives including AEG S.A.F.E., AEG 1Source, AEG 1EARTH, AEG 1Force, AEG Encore and AEG Energy Services, in addition to working closely with AEG Global Partnerships and other divisions of the company.

“I am looking forward to working with the great group of professionals in Minnesota with AEG Facilities," said Lombardi. "Target Center is an incredible facility and I am excited to continue to build upon the success they have created.”

Prior to joining AEG Facilities and Target Center, Lombardi spent the last 16 years in executive roles and as General Manager for numerous arenas around the country, including Oklahoma City’s Chesapeake Energy Arena, home to NBA’s Oklahoma City Thunder and the adjacent Cox Convention Center, Boston’s TD Garden, home to the NHL’s Boston Bruins and NBA’s Boston Celtics and in Nashville, at the Bridgestone Arena, home to the NHL’s Predators.

About Target Center
Located in the heart of downtown Minneapolis’ vibrant sports and entertainment district, Target Center is proud home to the NBA’s Minnesota Timberwolves, and four-time WNBA world champion Minnesota Lynx.  Over 1 million guests visit the arena every year - making Target Center one of the top arenas in the world.

Target Center recently completed a MAJOR renovation - transforming the venue into a state-of-the art arena. Totaling $145 million, the project encompassed infrastructural improvements, guest experience enhancements and aesthetic changes on all levels of the arena.  The renovation project was a joint venture between the Minnesota Timberwolves/Lynx, City of Minneapolis and AEG Facilities.  To learn more about Target Center's renovation, click here. Target Center opened in October 1990. The facility is owned by the City of Minneapolis and managed privately by AEG Facilities.  Target has been the naming rights partner of the arena since its opening.