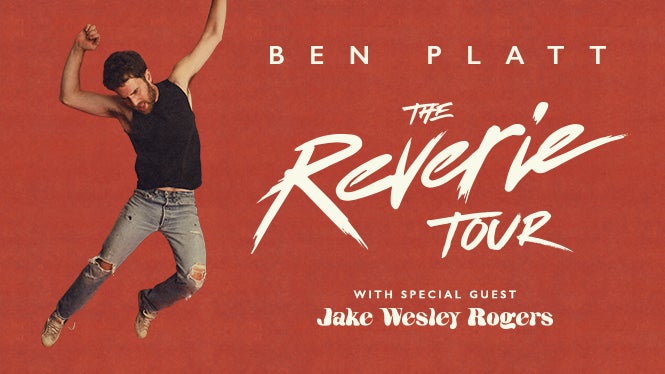 March 31 – Portland, OR – Theater of the Clouds

In addition, last night Platt performed a very special YouTube livestream performance from Los Angeles which can be streamed HERE and this morning saw Platt heralding REVERIE with a show-stopping performance on NBC’s TODAY as part of their 2021 Citi Music Series, streaming now HERE. Next week will see Ben visiting NBC’s Late Night with Seth Meyers as both lead guest and musical performer, set for Monday, August 16th (check local listings). This week’s appearances mark the latest in a recent series of high profile TV performances and interviews, including the live season finale of NBC’s The Voice, the nationally syndicated Kelly Clarkson Show (streaming HERE), and CBS’s The Late Late Show with James Corden (streaming HERE). Additional TV appearances will be announced soon.

Platt’s much anticipated second solo album, REVERIE includes such extraordinary new singles as “Happy To Be Sad” and “Imagine,” both available now on all digital platforms. Produced by Michael Pollack (Justin Bieber, Katy Perry) and Zach Skelton (Jonas Brothers, Paul McCartney) with additional production from GRAMMY® Award nominee Gian Stone (Maroon 5, Dua Lipa), “Happy To Be Sad” was met with applause from Billboard, which raved, “On ‘Happy To Be Sad,’ the singer beautifully illustrates the portrait of a lover having to leave his significant other for a while, and simply reveling in the sadness as a source of pure joy. It's a confusing emotion to describe until you hear Platt's cherubic vocals sing the words – then it feels like it's happening to you right in this moment.” “Happy To Be Sad” is joined by an official companion visualizer, streaming HERE.

“Imagine” arrived earlier this summer and has fast proven one of Platt’s biggest singles to date. Produced by The Monsters & Strangerz and Jon Bellion – the superstar team behind such hits as Maroon 5’s “Memories,” Justin Bieber’s “Holy,” and “Prisoner” by Miley Cyrus Feat. Dua Lipa – and co-written by Platt with Bellion, Michael Pollack, Alexander Izquierdo, Jordan K. Johnson, and Stefan Johnson, the track now boasts over 20M worldwide streams and counting. Hailed by Rolling Stone as “tender and confident… a tribute to everyday saviors,” “Imagine” reached #7 on iTunes’ “Top Pop Songs”, to the “30 Hot AC Hit” list, and the top 50 on Spotify’s “US Viral 50” while also lighting up Hot AC Radio outlets nationwide. An official music video, directed by Matty Peacock (Billie Eilish, Shawn Mendes, Selena Gomez), is streaming now via YouTube HERE.

What’s more, Platt recently unveiled a spectacular cover of Lady Gaga’s classic “Yoü And I,” featured on her newly released BORN THIS WAY 10th anniversary celebration, BORN THIS WAY: REIMAGINED. The track earned raves from such major outlets as Billboard, which wrote, “Ben Platt is the one artist here with the Broadway vocal chops to match Gaga – but instead of aping Gaga’s rock ‘n’ roll swagger, he brings out the tenderness…Love songs are the bread and butter of pop music, but the truth is, it’s hard to be this sincere and vulnerable, to sing with no armor at all. Ben Platt makes it feel utterly natural.” An official music video is streaming now HERE.

SING TO ME INSTEAD proved a full-fledged sensation upon its March 2019 release, amassing over 337M global streams and earning applause from fans and critics alike. A truly multi-faceted actor, singer, and all-around performer, the album saw Platt making a remarkable arrival as a solo recording artist and a songwriter, co-writing all of the album’s 12 songs. Highlights include “Bad Habit,” “Ease My Mind,” “Grow As We Go,” and “Temporary Love,” all of which are joined by official music videos streaming HERE.

The winner of the 2017 Tony® Award for “Best Leading Actor in a Musical” for his performance as Evan Hansen in the smash hit, Dear Evan Hansen, Platt also received a GRAMMY® Award for his role on Atlantic’s DEAR EVAN HANSEN (ORIGINAL BROADWAY CAST RECORDING and a 2018 Daytime Emmy Award for his part in the cast’s powerful performance of “You Will Be Found” on NBC’s TODAY. Platt will reprise his role as Evan in the Dear Evan Hansen film, set for release on September 24th; watch the official trailer HERE.

Platt’s evolving body of work also includes memorable roles in the TONY® Award-winning original Broadway production of The Book of Mormon, the blockbuster films, Pitch Perfect and Pitch Perfect 2, and the acclaimed Netflix series, The Politician which earned him a Golden Globe nomination for “Best Actor in a Comedy,” among many others. Platt – who recently made a guest appearance on FOX’s The Simpsons, began filming Merrily We Roll Along with Beanie Feldstein, directed by Richard Linklater, which will be shot over the course of twenty years. Ben will soon be seen in BJ Novak's anthology series, The Premise a new comedy-drama coming to FX and Hulu. He will soon begin production on the film, The People We Hate At The Wedding alongside Kristen Bell and Allison Janney.