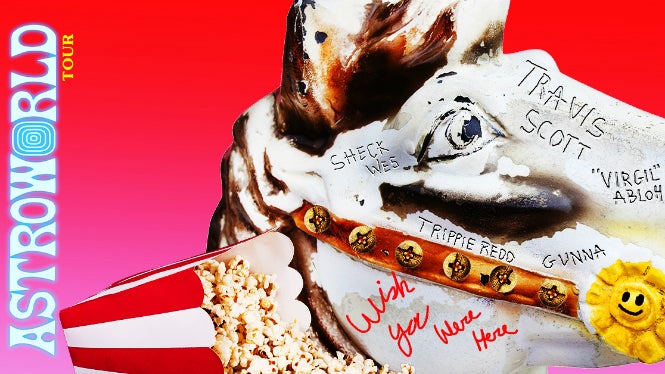 Known for his explosively wild performances, the history-making Houston superstar will launch his biggest tour yet this fall: "ASTROWORLD: WISH YOU WERE HERE." Bringing the amusement park of his chart-dominating critically acclaimed blockbuster ASTROWORLD to life on stage, the artist has envisioned a show unlike anything done before and unlikely to be topped.

Produced by Live Nation, the tour kicks off in Baltimore, MD, returns to Houston for the inaugural ASTROWORLD FESTIVAL November 17, and rolls through Minneapolis at Target Center on December 8, before concluding just before Christmas at The Forum in Los Angeles.

Official ASTROWORLD: WISH YOU WERE merch is also available at the store now and going fast HERE.

Additionally, ASTROWORLD retains its spot at #1 on the Billboard Top 200 for a second week in a row. It's just the beginning. The ride is about to get wilder...

Like the wildest rollercoaster imaginable, Missouri City, Texas-born and Los Angeles-based multiplatinum iconoclast Travis Scott flips popular music, culture, and fashion upside down. Bathed in bright lights, scents of carnival pleasures, and the climactic screams of millions worldwide, his third full-length album, ASTROWORLD [Cactus Jack Records/Epic Records], opened up as the undisputed, undeniable, and ultimate musical attraction of 2018. Upon arrival, it catapulted to #1 on the Billboard Top 200, earned the "second highest debut of the year," and raised the bar by achieving the "biggest ever first-week streaming total for Sony Music" with 349.43 million streams worldwide in under seven days.