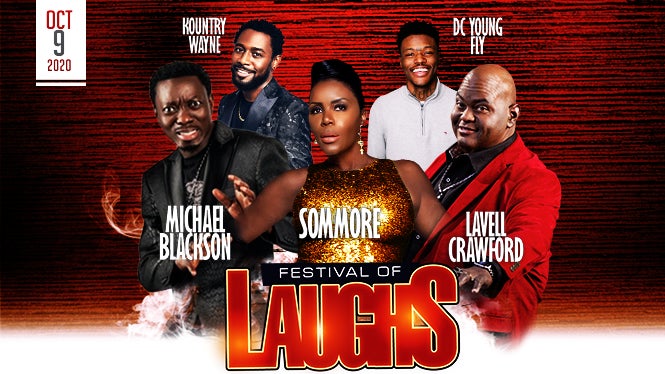 THE FESTIVAL OF LAUGHS COMING TO TARGET CENTER IN MINNEAPOLIS OCTOBER 9, 2020

MINNEAPOLIS, MN (Monday, March 02, 2020) – Comedian heavyweights Sommore, Lavell Crawford, DC Young Fly, Kountry Wayne and Michael Blackson are set to bring The Festival of Laughs to Target Center in Minneapolis on October 9, 2020. Tickets go on sale Friday, March 6 at 10 a.m. local time and will be available to purchase at the box office, AXS.com or charge by phone at 888-929-7849. For more information on the show, visit www.FestivalofLaughs.com.

Each year, the Festival of Laughs unites some of the most popular names in comedy on stage. The highly celebrated entertainers will bring down the house with their sharp wit, unbridled humor and hysterical storytelling for a night fans won’t want to miss!

ABOUT SOMMORE
In her more than 20-year career, award-winning comedienne of “Chandelier Status,” Sommore, has become a trailblazer for women in the comedy business as one of the most successful comedians in the U.S. and abroad. Sommore has been featured in a number of hit films including "Soul Plane," "Something New" and "Friday After Next." Her all-new self-produced comedy special, "A Queen With No Spades" recently premiered on Showtime.

ABOUT DC YOUNG FLY
Originally having picked up traction for his hilarious videos on Vine, DC Young Fly is a hands down fan-favorite amongst today’s generation. He is a veteran cast member of Nick Cannon’s “Wild ’N Out” (BET), which is entering production for its 13th season, and has brought the humor to MTV’s TRL (Total Request Live reboot) as one of its main hosts. Film credits include “How High 2,” “The New Edition Story” and “Almost Christmas.”

ABOUT KOUNTRY WAYNE
Raw, real and wickedly hilarious, “Kountry” Wayne Colley’s 2500 (and counting!) microformat digital videos have catapulted him from life in small town Georgia to mega social media superstar and comedy sensation, selling out clubs and theaters across America. Since his first Facebook post in October 2014 went viral, the charismatic comic has amassed several million followers across Facebook and Instagram. Wayne is currently on his 2019 “Drip Tour,” drawing SRO crowds.

ABOUT MICHAEL BLACKSON
Michael Blackson aka ‘The African King of Comedy' has been entertaining audiences all across the country and around the globe for more than a decade. Blackson’s comedic appeal grew from his involvement with BET’s “ComicView” series and HBO’s “Def Comedy Jam,” “Showtime at Harlem” and “Live in Hollywood.” Shortly after getting his big break starring opposite of Ice Cube and Mike Epps in “Next Friday,” Blackson released his top-selling sketch comedy CD entitled “Modasucka Welcome to America.”